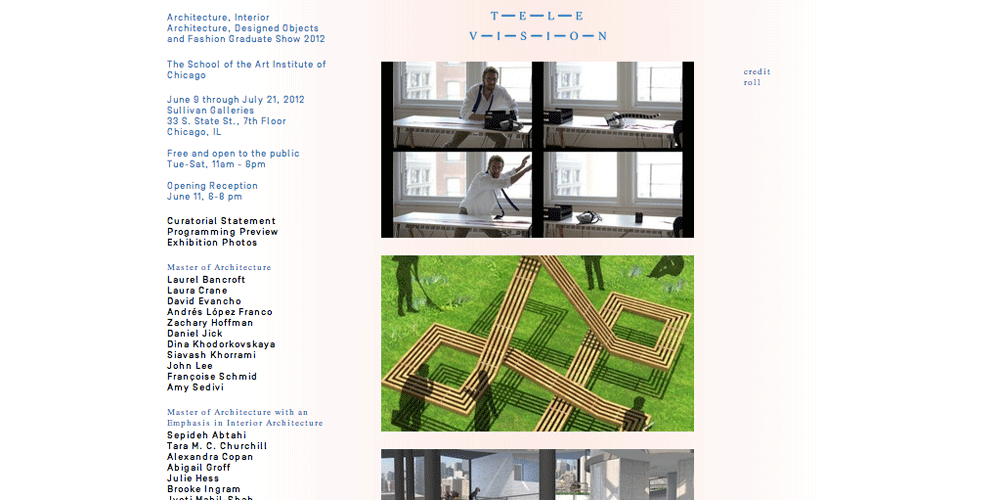 School of the Art Institute of Chicago

I. Tele vision, interpreted through its Greek and Latin roots, means “seeing from a distance.” The projects presented in the 2012 Graduate Design Show share this long view perspective, far-reaching in speculation, application, or duration.

II. The works also gather around conventional notions of television. They are collective in nature—directed towards the general public and relayed through episodic, narrative imagery. Renderings are keys to understanding the impact of complex, large scale projects. One proposal maps the sequential repair of the urban fabric in Providence, Rhode Island, after the dismantling of an obsolete highway infrastructure. Snapshots suggest a phased development process instead of an inflexible master plan.

III. Other pieces rely on images familiarized by the media to communicate their message to the audience. A wall is made from paint cans, each relabeled with an idyllic image of a dream home. This small scene is multiplied through stacking, conveying the unified story of a larger population. An office desk made for an impulsive work “romance” becomes a set, a scene for real life that brings a dramatized version of televised life back into everyday space.

IV. Like TV images, these proposals end just beyond the frame. Each functions as a pilot episode, a stand-alone prototype written as the first of a series, a premiere with an eye toward the finale.